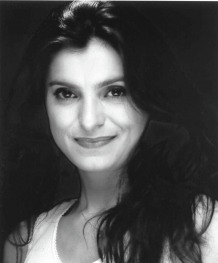 Şenay Özdemir is a Dutch-Turkish journalist and women's rights advocate. She has published op-eds in newspapers around the world on topics ranging from feminist politics to virginity among older brides. In Europe, she's a familiar face on television and magazines.

Özdemir, the first Turkish tv-host and tv-producer in Europe, founded the monthly woman's magazine SEN (demographic: Mediterranean women aged 20-35 living in the Netherlands). With using the term 'mediterranean' for her magazine target group, which was by then only used for Italian, Spanish or French people, she surprised many when the magazine's targetgroup was also for young muslim women in other countries around the Mediterranean Sea.  The magazine aimed at young women in the Netherlands who, like herself, have mediterranean backgrounds and must find their place in a liberal, post-religious European world. As editor-in-chief, she wrote an advice column, addressing women's questions on topics from birth control to how to ask their boss for a raise. SEN (since 2007 only availabe in digital version) showcases the personal success stories of Mediterranean women who participate fully in European society as students, professionals, and civic activists.

Şenay Özdemir received the ASN Bank Media Prize and later that year SEN was elected “Best New Magazine of 2004” by the leading Dutch newspaper De Volkskrant. Her work has been profiled in many Dutch and European magazines, but also in the International Herald Tribune, the New York Times, Foreign Policy and Austin American Statesman. She was guest editor in chief of Dutch magazines such as Viva and Intermediair.

She was member of many advisory groups: Social Platform Rotterdam, Women on Top, Taskforce Parttime Plus and did consulting to various ministeries. She participated to the International Visitor Leadership Program and traveled throughout the USA. The same year she was asked to speak at the International Women's Conference in Bangalore, India. She was one of the participants of the Apeldoorn Conference in Belfast, Northern Ireland, which was organized by the British Council.

From December 2008 she worked for The University of Texas at Austin where she was invited as a visiting lecturer at the School for Journalism.

In June, 2009 her first novel, De Harsclub (The Waxclub), is published which is the first Turkish chicklit in Europe. The novel is being touted as the Mediterranean version of "Sex and the City." She is currently working on her second novel Letters from Budapest.