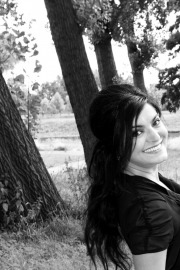 I was born in Safranbolu, Turkey, but grew up in the Netherlands and left my heart somewhere in the world during the many travels of my life. The World is my residence and I pack my bags whenever possible. After having lived in Austin while teaching at the University of Texas last year, it's legitimate for me to say that I am a global citizen.

I am an author, publicist, lecturer, women's rights advocate and responsible for a gorgeous 11-year old boy, Hakan.

I gained fame as the first Turkish tv-host and producer in Europe. This unique position gave me the opportunity to empower other girls and women. Many of them obviously saw me as a role-model since they sent me cards, letters and emails with their questions and problems; specially for them I created a question-and-answer Web site because so many young girls and women seemed aimless and lost. The Web site got 100,000 hits in the first month. That led to my own magazine, SEN, for young, educated mediterranean women with an islamic background.

I presented, produced and edited TV-programs. I wrote columns in women's magazines and op-eds in newspapers in the Netherlands, Belgium and US. By giving advice to so many women in media and books, I have been called the 'European Oprah' by many. Of course, I am flattered, and still hoping for Oprah to call me, but until that time my main goal is to inform as many women as I can about their rights.

Eight years after the publication of my Web site I still get letters and emails from women all around the world, which makes me realize that women will always need other women to talk to. I am not saying that I have the right answer. Questions sent to my advice column can be very difficult. A young girl wants to know how to avoid her arranged marriage; a woman wants a divorce from her husband, but she has no income of her own. Another girl/woman wants to know how she can have her hymen repaired.

All questions where many women deal with. Western or non-Western, Muslim or non-Muslim. There is still so much insecurity and so much ignorance. And it gets tougher when the majority of women have been indoctrinated that there is only one formula to be a woman. Whether it comes from social, societal or religious convincements, women should learn that they only depend on their own values and standards. With my blogs, articles, books and lectures, I want to show that every woman has the right to live as she wants to. Freedom, in my view, is to be preferred above (societal) force and prohibition. A young woman who makes her own choice will radiate a natural confidence that will be admired by others. She will not easily be tempted to compromise herself with all kinds of opinions of others.

I have always been hungry for information. Asked the silliest questions, forced myself to explore the world and read everything I could read. A woman reading, after all, is a woman not cooking or cleaning.